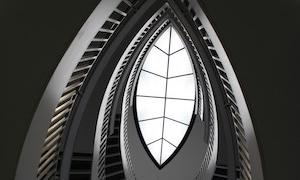 I snapped this image of the staircase in Chicago’s Museum of Contemporary Art then swung around to face a very bold, tersely worded sign banning cameras of any kind inside the museum. I paused long enough to note I wasn’t in danger of a docent tackle in my immediate future and carried on. Now, I’m not usually the type to seek out rules to break (although there’s a successful streak of begging forgiveness after the fact) but even if I had seen the sign, I likely would have ignored it.

The pattern of the staircase upward view was irresistible. Whether we want to admit it or not, we are drawn to patterns. This one drew me in. Here we have a logarithmic shape, named for us by that popular Middle Ages mathematician, Fibonnacci, who has an equation behind it that makes my head hurt. What my head prefers to focus on is the shape – the illusion of infinity, infinite possibilities.

The Golden Spiral as its sometimes called is found throughout the natural world, meaning Mother Nature was a popular mathematician long before Fibonnacci. Her most recognized spiral is the nautilus shell. The nautilus, you see, continually builds a new chamber because it’s continually growing. It always needs a bigger space to occupy. It does this throughout its life and there isn’t a design for a final chamber. Let me repeat that: it never plans a final chamber.

This is the key lesson the nautilus gives us – always be growing and expanding. And the footnote to this lesson is that the nautilus doesn’t shed chambers as it outgrows them. It keeps them as part of the whole. Its past makes it stronger, able to create an ever-bigger self.

I’d been looking for the appropriate metaphor to guide me through my own recent life changes. This pivot away from the familiar and toward the not-yet discovered. The Nautilus Shell, the Golden Spiral, the Museum Staircase – they show me a pattern that doesn’t diminish where I’ve been, but rather strengthens my opportunity to grow and expand.

Perhaps you’ll join me as I build out the newest chamber, climb the next flight? There may even be some new, tersely worded signs we can ignore along the way.

Lisa Graham-PetersonWill we ever want something to ‘go viral’ again?
Scroll to top

Because these cookies are strictly necessary to deliver the website, refusing them will have impact how our site functions. You always can block or delete cookies by changing your browser settings and force blocking all cookies on this website. But this will always prompt you to accept/refuse cookies when revisiting our site.

If you do not want that we track your visit to our site you can disable tracking in your browser here:

The following cookies are also needed - You can choose if you want to allow them: