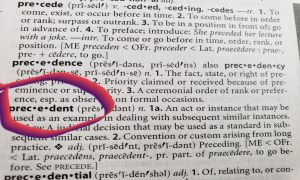 I pride myself on knowing words. And how to use them. That’s what people pay me for ‘lo these many years. There are more than a million words in the English language today, but less than 200,000 in regular use. And every day, new words come into play – whether we want them to or not. Sometimes it’s just old words in new ways. Again, whether we agree or not.

Imprinted permanently for me is the first time I, being paid to write, was called to task for a word I used. A word, having heard repeatedly around me in business circles, I was sure was the perfect word for my purpose. Early in my career – and eager to excel at my new corporate communications job – I sent a draft up to my subject matter expert. Among the comments returned was an emphatic, “This is not a real word. Change it!” The individual was an up-and-coming actuary* in the insurance company we both worked for. To be second-guessed by, of all things, an actuary was – shall we say – infuriating.

I left numbers to the actuaries and assumed they left the words to me. I went straight to the bible of words, the dictionary. Hmmm. The word was not there. I checked my next-best source: the Associated Press Style Guide. Ditto. I could not argue. I was humbled. It didn’t matter that myriad business articles and annual reports found this word acceptable, it would not appear in my article. Not this time.

Yes, I know. It’s a word now. Along with Jedi and gig economy. I get conflicting answers about how often, and more importantly HOW, new words are officially added but our language isn’t static. That’s a good thing. Yet we abuse our Mother Tongue and to little gain. I am not talking about youth. Their slang is experimental, like their lives, and part of their growing. It’s also often fleeting (Daddio? Cool, dude?). Sometimes it becomes exactly what we need to express ourselves in a new world. Business and professional circles, however, are the harshest on our language, wearing it down to a stub with no regard to the consequences: miscommunication. Mass media provide the echo chamber.

Words are here to help us communicate. Emojis can’t do it all. When we fail to use words in ways that others will understand, we fail to connect. Relationships suffer. Outcomes fail. We are frustrated. Others turn away or give up. Or worse, they believe we meant something entirely different than what we intended.

I spend a good deal of my time with university students trying to impart the importance of language in how they’ll fare in the business world. Despite their protests, I delete points for clichés and jargon, reminding them of the more than a million words they have to choose from to explain, influence, communicate. And yet I know I’m sending them out into a culture that rewards beating a perfectly useful word like “synergy” into an empty outline of its former self.

I still try because I know there will come a time when they’ll be forced to have a conversation, an important conversation. Devoid of technology. They won’t be able to grab a meme to do the job. They’ll need to use words. And the words will count.

Postscript: The word “unprecedented” does not appear in the last print version of Merriam-Webster’s dictionary that I own, although I did find entries for unhinge, unfocused and unfruitful.

*This actuary went on to a long and celebrated career at this insurance company, culminating in a lengthy stint as CEO.

Avoid Pressers That Suck With These 4 Questions
Scroll to top

Because these cookies are strictly necessary to deliver the website, refusing them will have impact how our site functions. You always can block or delete cookies by changing your browser settings and force blocking all cookies on this website. But this will always prompt you to accept/refuse cookies when revisiting our site.

If you do not want that we track your visit to our site you can disable tracking in your browser here:

The following cookies are also needed - You can choose if you want to allow them: