Warning: Creating default object from empty value in /home/customer/www/lisagrahampeterson.com/public_html/wp-content/themes/enfold/config-templatebuilder/avia-shortcodes/slideshow_layerslider/slideshow_layerslider.php on line 28
 Crisis communication lessons from Katrina … the hurricane, not the girl – Lisa Graham-Peterson 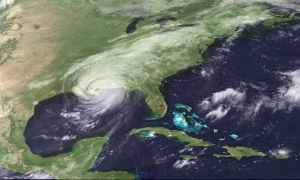 I know two Katrinas. One got a passing mention earlier this week, the 15-year anniversary of history-making Hurricane Katrina. She was a devastating Category 5 storm that left the Gulf states of the US, particularly New Orleans and its greater metropolitan area, in tatters for years to come. The death toll is still uncertain. Her distant relative, Hurricane Laura is getting all the headlines this week, but I flashback to 2005 with every news report.

My experience with this Katrina was from miles away, part of a crisis communication team fielding disaster response for our employer, a major agribusiness. We had a grain export facility at the very end of the Mississippi River as it spilled into the Gulf – the center for much of Katrina’s wrath.

In 2005, I was not new to crisis communications. I had managed media response and employee messaging for myriad events before. But Katrina imprinted invaluable lessons that no situation before or since matched. I’m sure others – whether in communications, operations or emergency response – have similar experiences. Here are my top three takeaways from Katrina.

Have a plan. I know – we always say this first. This was different. An agribusiness with numerous lines of busines had an almost constant risk of an “event” – a grain elevator explodes, a pipeline leaks, a railcar jumps the tracks. We were fortunate to have detailed disaster response and recovery plans and routine drills. But none of those plans prepared us for a Cat 5 hurricane and 53 breaches of flood protection structures submerging some 80% of the area where our employees lived, and our business stood.

An existing plan meant that we weren’t wasting valuable time trying to figure out the fundamentals. Like how to reach our location manager when cell phone towers and power lines were kaput. (Look up the old Nextel network.) Instead, we focused on the unique challenges of THIS event, like reaching scattered employees back when social media was still a toddler and cell phones were not yet smart.

Prioritize your people. Even if we’d had an unlimited communication team, addressing all key audiences at once is madness. Some should jump to the front of the line. The Friday before Katrina waltzed across Florida, preparations for a shutdown were already in place as our employees and export partners were used to hurricane season in the Gulf. Now every employee was displaced for an indeterminate period of time.

With massive flooding in the region and Katrina on the move, the rail and river system that moved our farmers’ grain to the Gulf for export was at a standstill, as well. Many “breadbasket of America” areas were heading into harvest and expecting to send their supplies southward. And the media descended. We had a strong reputation as always answering reporters’ calls and, boy, were they calling.

No surprise that our employees were first – and the most challenging. Remember, there was no Twitter yet. Customers and farmers were watching the situation on the news so were understanding about the unknowns. The media turned out to be as much our resource as we were theirs. My colleague and I likely answered more reporters’ calls in 5 days than we collectively had in the previous decade. (Ok. Maybe I’m exaggerating, but not by much.) Quotes from us in the national news was a signal to affected employees staying with friends or family sometimes several states away that the facility was ready to open – with their jobs waiting for them – whenever they were ready.

Build relationships before you need them. We like to think that’s the foundation of good communication programs, but too often we get caught up in looking in the mirror instead of looking around at others. Our operations people were under water (pun intended) with managing a crisis of this magnitude and legitimately didn’t want to make time for media interviews. But we had already built trust with major news outlets so everyone understood the time would be well spent – on both sides.

As a global supplier, we had deep relationships with the companies that moved commodities across the ocean for us, as well. I’ll never forget how they stepped up following Katrina. Our employees wanted to work, and we wanted them back, but the area would take months before it was habitable again. Many didn’t even have homes to return to. One of our vessel partners parked a Panamax container ship at our port, outfitted to house our staff in staggered shifts – kitchen, showers, sleeping quarters. Their families had to stay wherever they took refuge but at least someone in the household was back to a bit of a routine.

There are too many other examples to chronicle here, including the thousands of other company employees across the US. They spent months raising money and donating goods from toys to refrigerators for Louisiana co-workers they’d never met (and likely never would).

I’m not saying we did everything perfect from a communications standpoint. We were certainly making some decisions by the seat of our proverbial pants. Perhaps my hindsight is a bit rosy, but I’ve used my lessons learned in every communication strategy since. Overall, I credit a company culture that trusted and supported its communication professionals. There’s a reason it’s called crisis communication.

Because these cookies are strictly necessary to deliver the website, refuseing them will have impact how our site functions. You always can block or delete cookies by changing your browser settings and force blocking all cookies on this website. But this will always prompt you to accept/refuse cookies when revisiting our site.

If you do not want that we track your visist to our site you can disable tracking in your browser here: